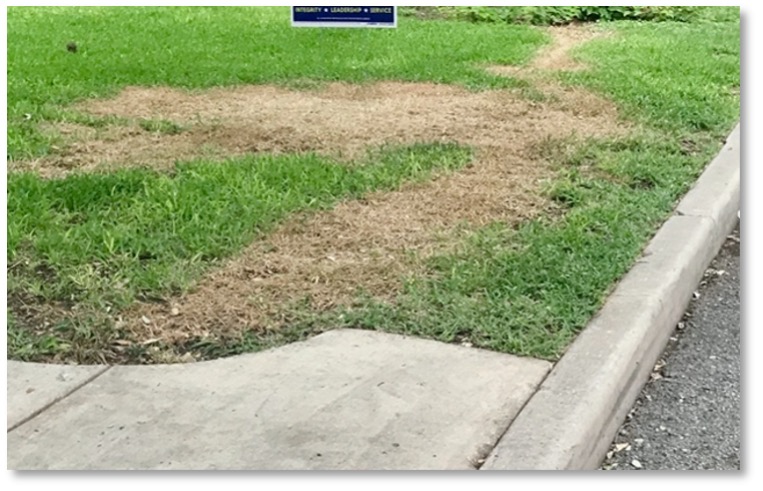 Around the time of the political elections at the beginning of May this year, the St. Augustine grass around a candidate’s sign in our front lawn began wilting. Within a week, that grass and a strip the along the entire width of the yard had died (photo, left), apparently the result of herbicide applied by vandals. Several dozen other yards in our neighborhood that had signs supporting the same candidate had suffered similar damage.

Six weeks after the damage occurred, a nursery professional believed any residual herbicide would no longer be polluting the soil. Rather than re-sodding the damage areas, I decided that planting runners would be less destructive to the undamaged grass. As a teen-ager living in Sutherland Springs 70 years ago, I had been impressed by how fast St. Augustine runners can cover a bare area.

Fortunately, a neighbor had a quantity of healthy runners invading their new planting bed. I harvested the ones shown in this photo (right), keeping them soaked in water for the hour or two between harvesting and planting. (The black plastic tub had been purchased from a home improvement store 40+ years ago and the collapsible dolly was a recent present from my wife, Peggy. I fitted the dolly with the white plywood board, left over from a recent kitchen remodeling project.)

After raking up most of the dead grass, I used my ancient edger, one from the 1940’s with a “new” handle, to make slots in the moist soil (second, below). A scrap of 3/8-inch plywood from my workshop was smoothed and used to push the runners gently down into the slots (third and fourth, below). This tactic allows you to plant runners pointing in both directions from each slot. It also helps you keep the grass blades pointing up and the runner’s roots pointing down.

Each slot was then filled with compost from our compost bin, keeping parts of the grass blades exposed to light.

Then each completed slot was fed a liquid root stimulator mixed according to the instructions on the container.

Peggy took this photo of me after finishing the project – tired, sweaty, and dirty – a “happy gardener.”

As of this writing, the runners are being watered frequently, are growing well, and are beginning to spread. Planting runners instead of sod avoided the need to dig out surrounding grass that already had runners growing into the damaged regions. The neighbors were pleased to have their planting bed cleared of runners. And the new runners were free, saving some $200, an important consideration for a retired schoolteacher. You are welcome to try the planting method of pressing runners into slots and covering with fertile soil.

Best wishes for you and your garden this summer.